All That Is Worth Doing Now In Tiberias | Driver To Tiberius 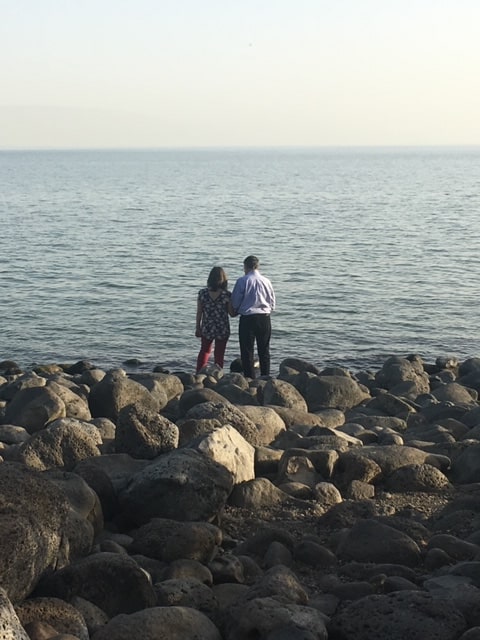 From karting on the water and racing boats in the Sea of Galilee to shops selling fine cheeses, pastries, spices, and fish, and more we have not talked about the historical buildings and landscapes, take a private driver in Israel and go to Tiberius!

Lake Kinneret is the source of the water of the state of Israel, to see it fully causes great pride for every Israeli especially this year that the lake is full we are dealing with the coronavirus that keeps travelers away from this wonderful region but there is good news, it is now possible to travel here without people.

The wonderful Lake offers a variety of options for the whole family ranging from sea sports, an excellent restaurant, various attractions, ancient churches and synagogues, and, of course, the ancient city of Tiberias.

We talked to one of the restaurant owners at Tiberias ' Maor Aharoni and he said
"Do you know how many people had to be in the sea of Galilee on Friday morning? Thousands. Thousands of people",
But perhaps under the deep silence and the absence of queues, it is worth getting here and experimenting with a new attraction on the coast of gardens that opened just two weeks ago.

"Aqua race" is a karting track in the water. Yeah, what you're hearing. An invention that when they began to plan it more than a year ago, who even knew how to spell Corona,
And there are still plans to sell the idea to more parks in the world that have shown interest. A ride with this quiet, green electric jet motorcycle speeds up adrenaline and is a really fun experience. The ride is within tracks marked with water with buoys, and the matter is also safe from a Curonian point of view, also because it is set to extreme sports, and also because every motorcycle drives one person.

"Who said that there are no waves in the sea of Galilee", this is the sign that welcomes us in the water sports complex "world dream", which is located north of the Tiberias bread. The business was founded by Ofer Global and is now run by his son Elad. The place offers everything related to sea sports - bananas, tubing, trailing boats, speedboats, also self-driving, jet skis, water skiing, and much more.
Since the corona, the days of fun for groups have disappeared altogether, "but families still arrive, especially because every boat that comes out is a 'capsule' on which only family or friends come together anyway," says Elad and notes that it can be arranged in advance, there is no need to linger in the field or at the box office, and that You can also leave for a family or romantic hour (including refreshments and an audio system). When we visited it was desolate from a person, although the activity is safe in all the necessary parameters. Come in. You'll have fun.

But the extreme won't fool you. Tiberias is a great place with a rich history, the city has existed for about 2000 years since it was ruled by Emperor Tiberius, the Old Town offers a beautiful theater and also amazing hot baths! Besides, the city is a Pilgrimage for travelers and campers and ultra-Orthodox families, who come mainly during the Inter-time period and find here cheap vacation options the cost of the hotel will be at least 50 percent cheaper than in Tel Aviv or Jerusalem.,

The sense of humor of the locals is amusing, Tiberias is on the Syrian-African Rift and every 100 years an earthquake occurs,
Itzik Aflalo says: "every century there is an earthquake in Tiberias that flattens everything. The last one was in 1927, We have seven more years left, " he laughs a very bitter laugh. ".

To sweeten the reality a little, we turned to the" bakery house Ehud", which offers alongside a variety of routine pastries that we all know, even versions of traditional pastries that have been prepared only in Tiberias for many decades. The famous "Ruska" cookie for example is the traditional pastry that accompanies those who come out of the hope for their wedding day.

The pastry shop Ehud.
"It is also the traditional pastry that Tiberias honor guests in circumcision and also in seven." We also tasted "pita basilisk" here, which is a kind of soft Borax stuffed with wild beet leaves and prepared it in Tiberias on Thursdays.
"The bakery house Ehud", the boys 26, 15: 30-5:00, and 15: 00, 050-4445733.

From the heaped bakery we advance with our minivan in Israel to the cheese deli Ofer, which is not a culinary fan in Tiberias and the surrounding area that does not know it. First of all serves us Ofer slot of the mythological sacred cheese, which the Tiberius have been traveling for years to bring from the dairy Observatory, and that you will not tell them the enlighteners - they are addicted to this. This is the dry, very salty cheese that let it dry longer and longer before baking it inside the Tiberini calzones (reminiscent of the Italian Calzona), or scraping into half a drained zucchini and cook in tomato sauce - medias Tavriini, or in the oven, which is eggplant baked with cheese, a dish originating from Portugal. Many of the cheeses in the Ofer deli come from the quality Schwartz interface, including truffle bars, fig bars, and coal cheeses. There are also pickled and smoked fish, anchovies, pickles, special preserves, and much more. Ofer's knowledge and cordiality are part of the visit.
"Ofer's cheeses", Yarkon Street,  20:00-8:00, 054-3163059.

We enter the Spice Shop "House of nature and Delali spice" where there is no Tavriini who does not know, including those who live far and come especially. On one of the shelves is a turquoise mix that stands out in a rainbow of shades of brown, orange, red, and yellow. With this do not cook, I tell the landlord, Yigal, and he laughs. "True, this is Jalal, a mixture for energetic purification of the house, to infuse positive energies. Such a spoon in the bucket of washing water and everything passes," explains Lee Yigal, and I think that you can take all the inventory and wash the streets of the city with him to return it to its heyday and embrace all types of population - ultra-orthodox, secular, young, old and that everyone will live here in an atmosphere of complete freedom. You will also find in Hert different versions that are prepared here, even those that I was an Iraqi did not know, for example in Hert without cinnamon whose color is red like paprika, different types of sumac, Ras Al־shop, spice mixtures for salad and rice, dried fruits and cracklings, oils and more. There is delivery up to the house, even for those who live far away.
"House of nature and spice Delali", Hayarkon 7, every day 9:00-19:00, Jo-v 14:00-9:00, 054-5831310.

To get to the "northern lake" fish bastion of Yoav and his son Amir, one has only to cross the road, but while crossing also a world that is disappearing, because once, this whole street was full of fish merchants, who started work in the wee hours of the night, when Tiberias fishermen were returning from the sea. Those who remember these days well and still wake up at two at night to get from the hands of the fishermen the best goods in the sea of Galilee is Yoav, the fifth generation of fish sellers, who grew up here in this store, who founded his mother's family.

"My mother started working here instead of going to school. She was only eight years old when she joined the management of the family store, " says the older and growing Man the body, who points to an old black and white photo where his mother, father, and he are seen in the fish shop. "Her name was Uhura, which is a pearl," he says with longing, " and everyone called her the Queen of the Sea of Galilee. Fishermen trusted her more than any other trader and gave her the best goods. When she was 20, she married my father and carried him to Tiberias. She was the man in the family. She wore the pants while we were all wearing dresses," Joav laughs as his son, Amir, Johora's grandson, prepares fish and chips for the passers-by lunch, emphasizing that " a Friday meal without fish in Tiberias is grounds for divorce on Sunday morning."
"Northern Lake", Hayarkon 12, a-th 19:00-9:00, F 14:00-9:00, 050-7538519.

Meanwhile, after all the tasting of cheeses and cookies and fish, I can not even think about food, but yes must rest a little from the exhausting and long wander through the streets and markets of Tiberius, all the same, it is the heat of July-August. The guy Beach Hotel has recently undergone renovation and is a real gem on the banks of the sea of Galilee, with a private beach that allows varied water sports and works even in the days of Corona, and a hammocks pool with a well-groomed public area, which can also stare at the waters of the sea of Galilee. This is a quiet bubble for those who want to escape from the boiling asphalt of the city around. The spa I did not model, but it looks good.
And after the body has regained strength, fluid, and space lust, it's time for a few more attractions,

It is worth taking a look at the Ottoman fortress, built-in 1745 at the top of the hill to the north of the Old City, and apart from its historical function fortification of the city, it is one of the oldest preserved and impressive buildings in Tiberias. It rises to a height of two floors and at its corners four round towers. 50 meters south from the fortress is the Saraya - the center of Ottoman rule: the town hall, the court, the prison, and the gallows room.

Not far away is the Scottish hospital, an impressive building in which a hospital that served residents of the city and the region once operated, and from 2004 the Scottish hotel operates. It's worth jumping here to be impressed by the structure. If you arrive in the evening, it is worth sipping a drink in the hotel's bar. 1st lightning Battalion Street.
On the slope descending from the Poria Ridge to the Sea of Galilee is the Switzerland Forest, whose area is 3,000 hectares and is planted to avoid erosion of the land towards the city. When we visited here, part of the territory was burnt, and a brief clarification showed that in the last few weeks a fire broke out here that destroyed a significant part of the slopes near the southern shores of Tiberias. On Corona days it is safe to take a walk here, enjoy riding the bike paths, go up to a spectacular view from the frost, and you can also stop for a picnic with all the delicacies you bought at the recommended food stores.

We offer you to visit Tiberius during the Israeli summer with a professional driver in Israel, during the winter our driver in Israel will be happy to take you exploring different sites such as ancient churches, for example, Capernaum and you will be able to see the first church in the world and many other interesting places.